When I was in college, I had a wonderful mentor/professor who helped me learn lessons that keep being relevant as I go through life—which, if you ask me, is the tell-tale sign that he was a great professor.

One of those lessons was that it could be almost impossible to establish self-worth, and to recognize self-acheivement. After we’ve learned how to do something—ANYTHING—really well, it seems almost like second nature for us to do it. Even if we’re producing quality work, we look at it and think ‘well, sure this turned out well but anyone out there could have done it if they put the time in.’ We forget that WE are the ones that put the time in to learn the skill, and that WE are the ones who now have something special for it.

This professor told me about a time when he was at a conference giving a talk. After he was done with his seminar (which was probably about something awesome like chaotic oscillators) he went on to listen to other professors and industry professionals give their talks. There was one he was sitting on, thinking to himself ‘WOW this guy is cool. Here he is building a genetic search engine (or some other incredible topic) while I’m just dorking around with chaotic oscillators.’ but then, after the talk, my professor went up to him. He wanted to tell him how neat he found the subject and the guys research… And when he got up there, the guy went ‘OH WOW you are that professor with the chaotic oscillators! I saw your seminar and I was so excited by it! You’re really doing something incredible while I’m just dorking around with genetic search engines.’ And thats when my professor realized that JUST BECAUSE THINGS SEEM COMMON TO US DOESN’T MEAN THAT THEY ARE COMMON. Our skills, our lessons, and our experiences are unique to each of us, we just are looking at them through the fogged glass of ‘been there, done that.’ Others won’t be looking at them through that same glass.

If you ever see artwork and say ‘wow I wish mine was that good,’ or read a story and say ‘gee I wish that I could write like that,’ you have to also remember that there is probably someone out there saying the same exact thing about your work to themselves. It might even be the exact same person who you’re envying.

Your work is important, and it is only going to get more important from here. 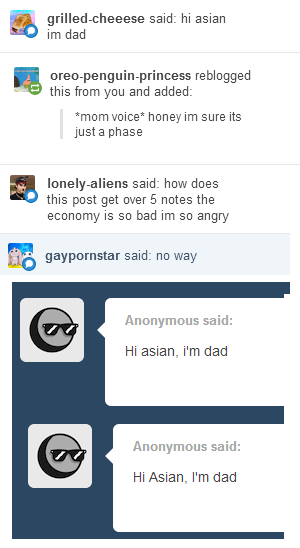 so for my biology assignment i had to pick four different species but when i actually went out and did it, the only plants were:

so i was like, ok, these gum trees all have different shaped leaves, i can look up what they’re called when i get home

what do i do

RvB fandom: ok yeah but where is Doc

Australia really needs to talk about its racism. The government and opposition start banging on on terrorism and all of a sudden it’s hunting-season on innocent Muslim Aussies. Aboriginal and Torres Strait Islander Australians are too many living in squalor. Indian students are wary of coming here. Home and Away and Neighbours can’t cast a PoC to save their life. People refer to themselves as ‘Australian’ in a way that suggests Vietnamese Australian, Greek Australian, Aboriginal Australian or Korean Australians are something different. We all need to talk about racism and confront it wherever we see it. We need to change the culture, one dumb joke or racist dating preference or school bully at a time.