so you may have noticed a post claiming that charleston shooter dylan roof’s bail was funded and he was released. this is wrong.

a satirical website known as newswatch published an article claiming dylan roof received $4 million in bail money. this of course is false, but unfortunately it went “viral” and now many news outlets are claiming he was released

Me (to older brother/little sister kindergarten students): 将来に何になりたい？ / What do you want to be when you grow up?
Older Brother: やっぱりお医者さん！/ Of course I want to be a doctor!
Me: いいね！私の父もお医者さんだよ！◯◯ちゃんは？ / That’s good! My dad is also a doctor. (Name of little sister)-chan, what about you?
Little Sister: えぇ？わからん！/ Huh? I don’t know!
Older Brother: お嫁さん？/ A bride?
Me: ◯◯ちゃんもお医者さんになったら？ / How about (Little sister’s name)-chan became a doctor also?
Older Brother: えぇぇ！？（笑）Ehhh!? (Laughs)
Little Sister: 嫌だ！だって気持ち悪いもん。/ Ew! But their job is so gross!
Me: 慣れるよ！みんなも、最初気持ち悪いけど、時間経つと慣れるよ。/ You get used to it! Everyone is grossed out by it at first, but as time passes you grow accustomed to it.
Little Sister: さあ、どうかな〜 / Hmm… I wonder~

And if you think this is an isolated incident, it’s not. This is sadly an extremely common experience. I often street pass (wireless program on the Nintendo 3DS) little girls and I am often able to see what they have listed as their future aspiration. More times than I can count I have seen “将来の夢はお嫁さんになること” (My dream is to become a bride!) In fact, it is the most common future aspiration I have seen listed for young girls. I am the only girl I have ever seen list their dream as wanting to be a “boss” (将来の夢は社長になること).

And even the teaching materials I have to use to teach my students English present women as having an expected gender role (housewife) and men are expected to work: 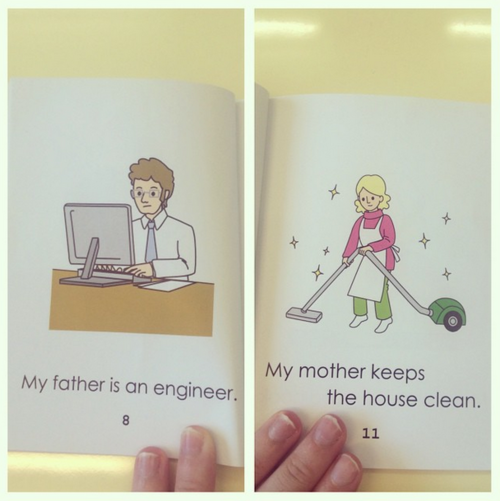 I live in very rural Japan, where I have heard husbands call their wives 家内(outdated term to refer to your wife that literally means ‘inside the house’ and is considered to be quite sexist). And, when talking to a student, they said it is still normal for men to propose to their wives by saying: “毎日俺のご飯を作って下さい” (Please make my food everyday.)

Anime for children also reflects these ideas, and from early on teaches women that they exist to bask in the male gaze (so many idol animes), where as men are taught that they are adventurers, sports players, etc. It is really incredibly depressing to watch.

Pornographic magazines are displayed in broad daylight – portraying the idea that women exist for men’s enjoyment 24 hours a day. If they really must have those magazines on clear display of women in very degrading positions, why is there not a male equivalent!? Children are able to see those magazines as well, and can come to their own conclusions.

Japan is the third-largest economy in the world, and yet it has the OECD’s second-highest gender pay gap. In Japan, full-time working women earn nearly 28% less than their male counterparts. And, pregnancy leave for women rarely even exists. When women take time off work to have a child, they have to reenter the company at an entry level position.

In short, I am extremely irritated at the amount of people I have seen arguing that Japan is in any way a progressive society for women. It is not. Please stop romanticizing the way this society treats women.

No. You don’t. It is a very unhappy place.

do not let white academia fool you into thinking that

Some Written Works (That Aren’t By White Dudes)

So…what’s up, white academia? Where’s the accolades for them?

If anyone in California is interested in adopting a dog or a cat, Kerns County Animal Shelter ( one of the most disgraceful shelters in California ) is being shut down. Dogs are being sold for 15$ and cats for 5$ ( all are fixed with shots. )

Every animal will be put down by September 30th.

You want to hear how gross of an exaggeration it was? Because my post didn’t even do it justice.

It was March 2011 when the first semblances of Homestuck began to seep through the wood and metal of the convention circuit. The unsuspecting convention goers had absolutely no idea what they were in for as little groups of kids with grey makeup and orange candy corn horns started around the con halls. People were curious, hell I was curious, but that’s all it was. Morbid curiosity.

It was around the time [S] ==> Kanaya Return To The Core was released that people finally hitched on and started getting into it.

And dear god was it hell.

Homestuck completely invaded the convention circuit, bringing in crowds of people ages 11 to 31, and a majority of them were kids. There were meetups every month for every occasion at every place you could imagine. Homestucks started to completely take over convention halls to the point where the dealers room all but emptied out whenever a photoshoot started. Promstuck was established and became a cemented part of convention going. Gamzee’s flooded the con halls at one point after he went crazy and people tried to recreate sopor pies.

People were sitting in bathtubs trying to sharpie dye their skin grey. Karkat cosplayers were having actual literal buckets thrown at their heads. Nicki Minaj’s ‘Turn Me On’ was a national anthem that sparked a music video. Children screaming ‘Fuckass’ in the hallways as they got their unsealed paint all over the walls and floors. There was at least one hundred Dave cosplayers at every photoshoot, and Photoshoots looked like this:

You see that Squarewave in the middle of the group? That’s me controlling the crowd around me. You want another example? Here:

That Kanaya with the cape in the middle is also me. Not good enough for you? How about this:

This was convention Homestuck. This was true nightmare. If you saw a horde of Homestucks coming at you, you fucking ran. There were literally hundreds of Homestucks back in 2011.

A video of a group of cosplayers sitting in a restaraunt, passing around a bucket and spitting in it caused outrage for everyone.

And then there was the tumblr side of it.

AU’s popped up for every conceivable thing. Broadwaystuck, Circusstuck, Dormstuck, Sadstuck, Any fucking thing you could think of, you slapped -stuck onto the end of it and it immediately became a reality. There were countless ask blogs for every character imaginable and the Homestuck Hype was real.

When the Cascade flash aired it crashed Newgrounds for two days.

‘FIRST!’ cosplays were a thing, and if you managed to make one you were heralded as a god. The Alpha Kids came into existence and everyone raced to cosplay them and to see who could name them, who could be them first. Canon urls became sacred and if you had one you were god.

There was a literal fight for the jadeharley url

Updates were daily, multiple times daily. It was the start of Octopimp’s Eridan and Tavros voices, it was how he got popular. Broadwaystuck sweeped tumblr like a plague and the words ‘Let me tell you about Homestuck’ became a threat. It was around the time I formed The Rose Lalonde Homestuck Thesis. Everywhere you looked, there was Homestuck. Hussie’s girlfriend was sending cease and desist’s to fanartists, Whatpumpkin didn’t even have Tshirts on it’s website yet. People kept skipping the Intermission to get to the trolls. And then Cascade happened.

Then the fandom went on Hiatus. A Megapause, if you will.

And then things started calming down. Once 2013 started, it was as if nothing had ever happened. Homestuck was still there, sure, but it was muted. Controlled. Expectant. As if anything that could happen now wasn’t anywhere near as bad as what had already transpired. Now we are but a shadow of the chaos that once was.

2011 Homestuck is not a gross exaggeration my friend. I lived through it. I survived.

It was exactly as bad as it sounds.

is there really a better explanation than this. Its perfect and so spot on.

fyi, if you are looking for a particular post in your blog and only remember a certain word or phrase, you can always do this:

me as a math teacher: Imagine that you have zero cookies and you split them evenly among zero friends. How many cookies does each person get? See it doesn’t make sense. And cookie monster is sad that there are no cookies. And you are sad that you have no friends.